Step functions are the way to coordinate components of a distributed application. Every component performs a well defined, separated task where output becomes an input of other tasks. Step functions consist of State Machines.

Amazon State Language is JSON-based language for defining state machines used by Step Functions. It is a collection of states leading execution from start state (can be only one) to very last state (many states can be the last one). Example of ASL

Above state machine will start on HelloSt state and pass result "Hello" to the WorldSt state input. Below is the graphic representation of this ASL:

First state CheckName will decide, based on the name input parameter, to which next state flow should be directed. Above code will produce state machine: 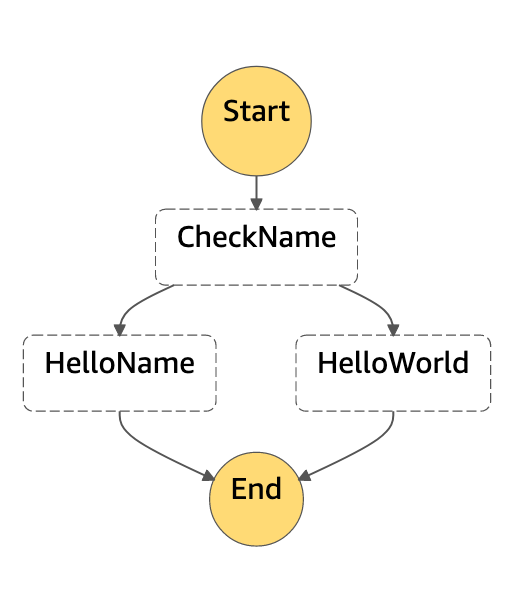 I see a nice use case for Wait state type here. Wait state delays state machine from continuing for a specified time - it can be a defined number of seconds, fixed timestamp, it can also be passed as a call parameter. The state machine will be very simple 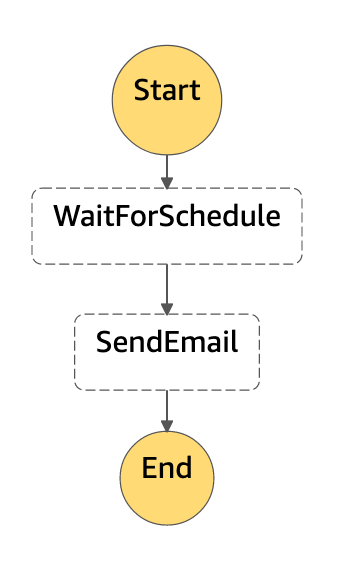 I choose a way to provide the exact time when WaitForSchedule state should pass execution further to SendEmail state by using TimestampPath attribute in state definition. Now I can invoke a state machine with an example event

Example execution trigger can be implemented, with an official SDK, like below

Execution can be named. Such name must be unique in the scope of state machine - sounds like a good way to achieve exactly one execution. SendEmail state can be extended by Retry (max attempts and exponential backoff supported!) and Catch attributes. Both limited to particular ErrorType.

Step functions look quite interesting, they were introduced in December 2016 and I haven’t played with them since today. Step function may look very limited and simple at first, but I can imagine some big state machines orchestrating complex execution logic.

State machine can be executed

What state machine can play with

Where I find it useful

What I haven’t touched

State function offers also tasks type Parallel and Map. First can execute many tasks at once, for example sending email and sending SMS at the same time (duration savings). Second can execute the same step for every item in input array concurrently (duration and state transition savings).

All of “real executors” - Task, Parallel and Map offers the Catch and Retry options. In my opinion, Catch should be used more like workflow fallback in case of error instead of handling errors inside Lambda Function. Retry is … well, retry.

Every step in workflow and workflow itself can have defined limit after which move error (no output from state/workflow) or to a fallback defined state.

Any logging capabilities of workflows execution.